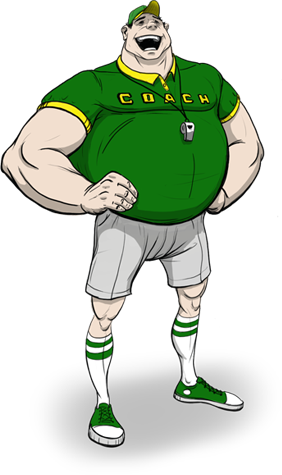 The heart of the BPL. Nobody knows his true age because he has seemingly been around forever. He teaches, motivates and inspires the entire team and has been a steady voice of reason for Matrix Man. Everybody on the team listens to his sage advice and they should because there is not a business situation that The Coach has not seen and succeeded at.

Dr. Know-It-All is Coach's dark reflection. Nobody knows how long these two foes have been at each other’s throats. Coach realizes how dangerous it can be if he is perceived as a “know it all” by his students and he is only a training class away from being his own worst nightmare.

He is always practicing at how he shares his advice so he never comes across as a preaching “know it all.” He realizes if and when that would ever happen his team and students would never listen to his advice again.

Matrix Man is Coach's champion with the team and the world at large. Everybody figures if MM is listening to Coach they probably should too. Coach is smart enough to realize that without a champion he would probably be a washed up ex-Coach by now.